The guanaco is a camelid native to South America that stands between 1 and 1.2 meters at the shoulder and weighs about 90 kg. The color varies very little, ranging from a light brown to dark cinnamon and shading to white underneath. 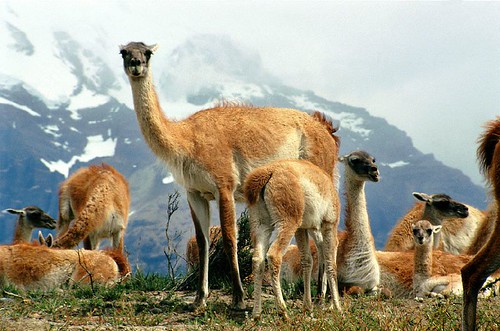 Inhabiting a range of arid and semiarid habitats, including desert grassland, savanna, shrubland, and sometimes forest, the guanaco can be found at elevations from sea-level to over 4,500 metres. While some populations are sedentary, others make seasonal migrations, including moving to lower altitudes, to avoid snow cover or drought.

Thought to number up to 50 million when Europeans first arrived in South America, the guanaco has since undergone a steep decline, particularly during the last century, and now numbers fewer than 600,000 individuals, 90 percent of which are found in Argentina. Although still relatively widely distributed, the guanaco now occupies only 40 percent of its original range, and has become fragmented into often small and relatively isolated populations, increasing the risk of local extinctions in some areas. L. g. cacsilensis is the more threatened subespecies, numbering perhaps fewer than 3,000 individuals, in small, isolated populations.

Major threats to the guanaco include overhunting, for skins, meat and wool, as well as poaching, habitat degradation, and the fragmentation and isolation of its populations due to development and the use of barbed wire fences. Overgrazing and drought, possibly linked to climate change, pose further threats to its hábitat. The large decline in guanaco numbers in the last century is thought to largely result from the introduction of domestic sheep, which monopolise the best feeding areas and compete with the guanaco for food Sheep breeders often kill the guanaco, viewing it as a competitor with sheep and a possible source of disease transmission, although it has been suggested that the diseases of domestic livestock are likely to threaten the guanaco rather than the other way around.

Although still relatively numerous and widely distributed, and occurring in a number of protected areas, the guanaco is thought to be dependent on effective conservation measures for its long-term survival. The species is listed on Appendix II of the Convention on International Trade in Endangered Species, meaning that international trade in the guanaco and its products should be carefully regulated. Although protected under various legislation over much of its range, illegal hunting and trade still persist, and lack of adequate funds, difficulties in enforcing legislation, and few incentives for local people to participate in guanaco conservation often make effective protection difficult.

Conservation priorities for the guanaco include accurate population surveys, adequate habitat protection and management, regulation of hunting quotas and better control of poaching, as well as increased public awareness. Without urgent action it is thought that the guanaco may soon be lost from parts of its range. Sustainable use of wild guanaco populations may offer some hope for the species, and may also provide an alternative to traditional agricultural practices in some areas, helping to reduce the risk of overgrazing, and contributing to rural development. Such sustainable use programmes often take the form of live-shearing initiatives, whereby wild guanacos are caught, sheared for their wool, and then released. However, although the process itself may not cause high mortality, the long-term effects on guanaco populations are still unknown.